“Something wasn’t quite right about this. Something was very peculiar, indeed. If that was truly a cane making that mute din over her head – what could it be? Who could it be?”

When lovely, young Judith Raleigh is forced to take a position as personal secretary to the handsome but somehow sinister Geoffrey Morehouse, she is drawn into a world of terror and dangerous secrets.

Why was her employer so tormented? And who was the mad but beautiful woman who seemed so intent on harming her? She had to find the answers before it was too late…

Our first woman is the young, the lovely, the financially insecure Judith Raleigh -who finds herself stranded in London, miles from home without a penny to her name when the…

The first time Britt saw the girl in the tight, thin dress he knew damn well he was going to have her, or go to hell trying. But he hadn’t reckoned then on the girl’s husband, a sadistic runt of a guy who’d smash in a man’s skull as happily as blink at him. He hadn’t reckoned on Newt, the lecherous, broken man who couldn’t bear to see other men whole. Worst of all he hadn’t reckoned on Ruby, the two-bit floozy who knew every conniving trick of her trade.

By the time he discovered the trap these people were building for themselves – and for him – it was too late, way too late, to get out…

In celebration of the glorious British summer we’ve been having this year, here’s my Gold Medal contribution. I love this cover – as dramatic and storm-tossed as any I’ve seen. 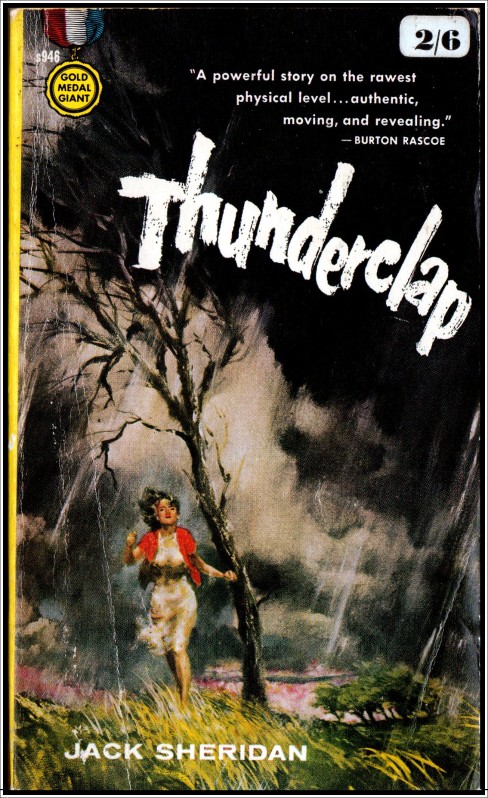 She came to a place of mist and menace – where even kisses tasted of terror… Haunted by a love that could not die but now could kill… Mystery lured her to the old castle, Death would show her the way out…

Foreboding mansions, misty moonlight and the moaning wind… There’s not much better than a night in with your favourite gothic romance is there? Well, imagine having a whole library full of them at your fingertips, delivered right to your door, without any of the hassle of having to find that precious extra shelf space!

Sounds like one of my favourite fantasies, but for those of you living in the good ol’ U.S.of A, this dream is a reality. Kristi Lyn Glass, founder of The Gothic Journal, has sent me some great news regarding the Gothic Romance Lending Library – it has now been re-housed and is looking bigger…

From the depths of the sea…

From the secret places of the universe

A HOST OF HIDEOUS THINGS – writhing… crawling…some scaled, some slimy, some finned… fashioned from the darkest places of man’s imagination…shaped grotesquely in nightmare forms… and some so horrifying they have no shape at all…

Bent on horror and destruction…

Growing from the floor in a bulbous, slobbering mass…

Grimacing from a tiger shark’s face…

What amazing artwork – I can only wish my aura is as spectacularly colourful as this cover model’s.

The Yard Vintage and Makers Market

And so it begins….

With only days to go till the fabulous Diplock Yard Vintage & Makers Market throws opens its door for another season of handmade, craft and vintage loveliness.

Held on the 2nd and 4th Sunday of every month the Yard re-opens this month with a suitably spring themed market on Sunday March 11th.

We’re going to be there with lots of horror and vintage pulp to chill the cockles of your heart so please stop by and say hello. Thereafter we will be at the market every second Sunday of the month.

So whether you’re a potential stallholder or you just want to pop by for a cuppa and a browse, follow the links below for more information.

Diplocks Yard (73 North Road, Brighton) is just a few minutes walk from Brighton Station, is open from 11am to 5pm and is free.

The editor of a monthly crime and detective magazine assigns to two of his staff writers, Sladen and Low, the investigation of the strange disappearance of an unknown showgirl. The disappearance was reported fourteen months earlier, but the trail is cold. The police, with nothing to work on, have lost interest. The assignment doesn’t look hopeful.

However, the investigators start asking questions and almost immediately things begin to happen. Witnesses are murdered, an attempt is made to do away with the investigators. The police once more open the case. The disappearance of the showgirl is found to be only a minor part of a ruthless plot.

Safer Dead has the authentic James Hadley Chase touch, which has deservedly earned him the title ‘Master of the Art of Deception’. It moves with the pace and power of forked lightening.

Another gorgeous James Hadley Chase paperback to compliment  I’ll Bury My Dead, included in an earlier post. This cover is illustrated by James Pollack who did the cover on Harley Street Hypnotist, below. 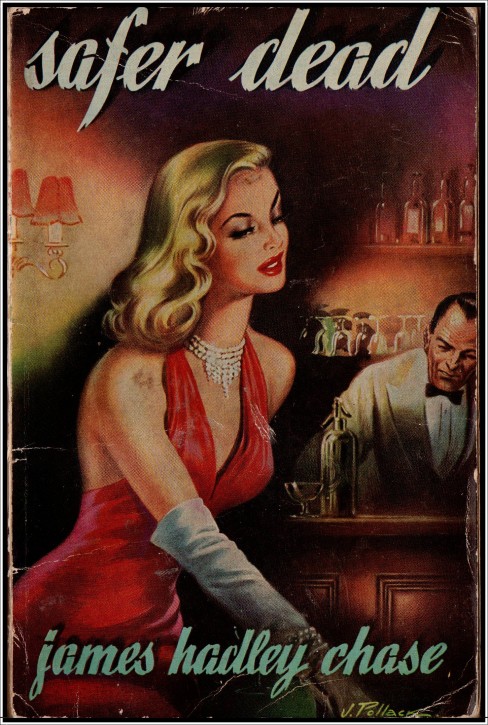 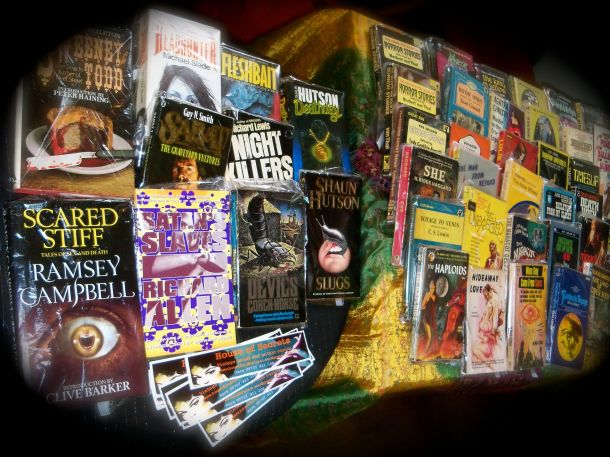 Another great day out for us and our books at Frighten Brighton yesterday! Thank you Scare Sarah and Cyberschizoid for hosting such a fab event!

And if Classic Horror is your thing, check out their next film event at London’s Roxy Bar and Screen this March:

How do you hypnotize a patient? How are mental and emotional problems solved by hypnosis?

This quite remarkable and dramatic book debunks the myths attached to the science – for instance that people can be hypnotized against their will, or if hypnotized can be made to perform actions inconsistent with their character.

It tells of the remarkable use of hypnosis in relieving pain during childbirth, so that now the Ministry of Health has ruled that doctors using hypnosis on such occasions may receive the same fee as an anaesthetist…

This one’s for all you budding Peter Powers out there – I must say, I love the cover art on this one. 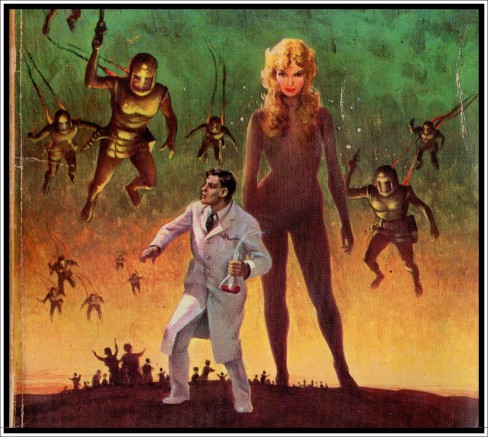 The tetraploids, giant men and women created by genetic experiment, only wanted to live their lives in peace, but they had to live in a world of the jealous ‘normals’ who gathered in screaming mobs with murder in their hearts.

Sena, the heroine of this remarkable science-fiction novel, is a tetraploid giantess whose youth would last more than a century, who looked with wonder at the toy bridges and houses of normal men and women who regarded her with fear and revulsion. Beautiful, defenceless Sena was the first of a new race, but would she be allowed to live…?

Previously published in the USA by the Berkley Publishing Corporation in 1961. First Foure Square Edition 1963.

Not sure how a nine-foot giantess can be that defenceless in a world of ‘normals’ but from the cover, I’m guessing she must have been vastly outnumbered or something… 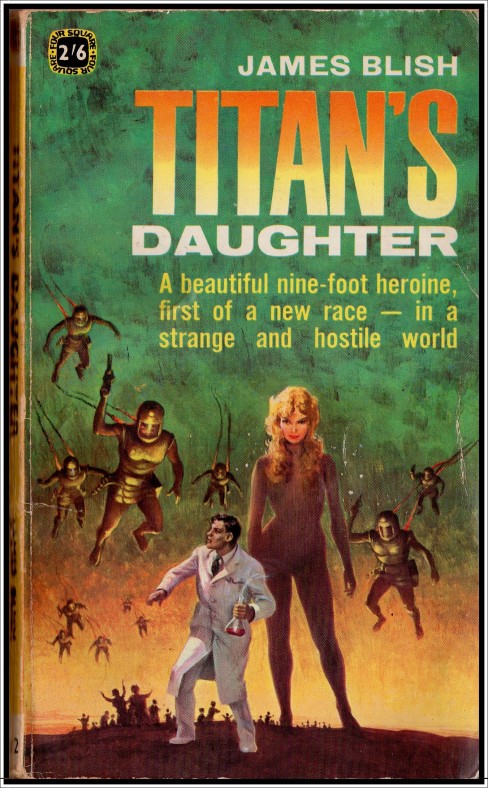